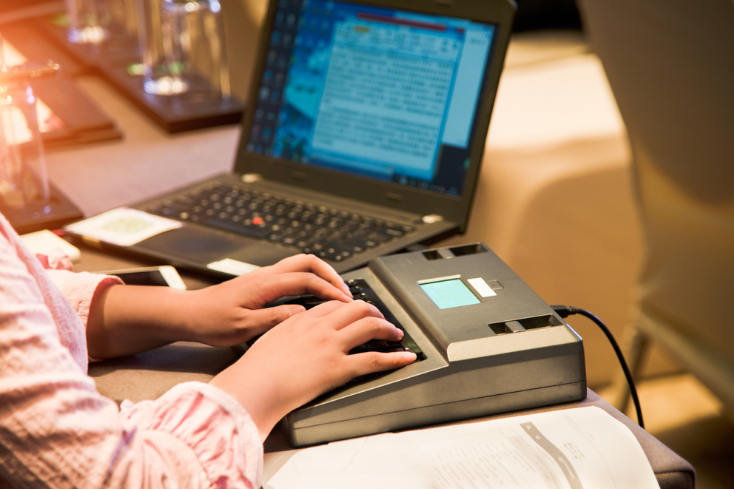 If you are looking for someone to serve as a court paper server, you may need to look to hire an additional staff member. Through this blog, we will be explaining the differences between the two.

What is a Stenographer?

A stenographer is a person who transcribes vocal content using a unique shorthanded style of writing called steno on a steno machine. Steno is written on the machine using syllables unlike letter to letter. This shorthand makes it much faster to type words and phrases.

Stenography is used mostly in legal proceedings during court reports. Although, they can work in other fields such as live television closed captioning, forums for the deaf, and hard-of-hearing. However, courtrooms are the place we are most familiar with hearing and seeing a stenographer.

How Does a Steno Machine Keyboard Work?

There is a “home row” similar to a regular keyboard. The left and right sides of the keyboard and where the initial and final consonants of a syllable or word are positioned. Not all letters are represented by a single key on a steno machine. The keys are a combination of keys together. Steno machines do not use space bars or return keys. The machine has 22 letters instead of the regular 26.

The words are then transcribed using software customized to read the steno typed on the machine. Some machines are even customized to the stenographer’s personal language to typing and transcribing.

What Does Stenographer Mean?

The word “stenography” comes from the Greek word “steno” which means narrow. Narrow writing is a term described as shorthand. Which makes sense because stenographers write in shorthand.

What is Court Reporting?

Court reporters are highly trained and skilled employees that take spoken words and transcribe them verbatim. These typed out verbatim transcripts of the court proceedings are used throughout the legal process to ensure each side has a fair representation of what happened in the courtroom in case any discrepancies arise. This allows the attorneys and judges to have access immediately to the transcript to go over for any number of reasons.

You can expect the roles of a court reporter to include but is not limited to the following duties:

Court reporters do not always work in the courtroom. Some are freelancers and work as personal court reporters in the Miami area.

The biggest difference between a court reporter and stenographer is the length of time it takes to receive proper education to become one. A personal court reporter, such as those who work in Miami must have to attend anywhere from 2-4 years of education from an NCRA approved institution.

Stenographers, on the other hand, only have to complete 6 months of training. In order to be a stenographer, there is not a need to secure certification or license. Both career paths must type at least 225 words per minute. In a deposition case court, reporters, as well as stenographers, must have an understanding of language interpretation skills, an understanding of court procedures, and legal terminology.

What is the Difference Between a Court Reporter and a Stenographer?

As mentioned before the main difference is in education and certifications. Both transcribe verbal and gestures that go on throughout the courtroom. The extra training and certifications that court reports go through are crucial to allowing them to create admissible evidence in court.

Role of Court Reports and Stenographers

Court reporters carry much more responsibility in the courtroom over stenographers, which would make sense as they have been through far more schooling and education. The stenographer’s main responsibility is to write down verbatim what is said by the judge, jurors, clerk, bailiff, plaintiff, dependent, attorneys, witnesses, and anything else that is said in the courtroom.

Court reporters are able to assist attorneys, judges, and organize and research any needed information. Stenographers’ sole duty is to transcribe what is said in court.

If you are looking for a qualified court reporter or stenographer DLE Legal, located in Miami, Florida has been supporting South Florida’s top law firms for over a decade. From court paper servers, stenographers, court reporters, document retrieval, interpreters, and translators. They have highly qualified stenographers to transcribe all of your court proceedings accurately and efficiently.